Lughnasa and a time of change. The lane is green again having been refreshed after the rain of the last few days but there have been changes brought about by the dry, hot summer weather. Stones that held themselves together in the dry stone walls of the old laneway have fallen out. Mosses that held them tightly and spread their glorious velvet over them dried out. Stones that had been carefully placed and positioned by trees have moved apart like people who are no longer close. They want distance between them. The barbed wire of the field fence still exists, holding them in harsh partnership as it eats into the tree bark. Small things like the change in an old wall mean changes and opportunities for hidden inhabitants of the lane and the fields  abutting it. An easier step up and over a fence, a small gap or hole to run through in a hurry. Sheep wool caught on the barbed wire  of fencing shows where determined sheep have ignored the human boundaries and moved further afield.

One tree further up the lane in a deeply wooded area is mostly clothed in ivy but there is a section where the ivy has been removed. Deer eat ivy and leave a browse line at about the height in the photograph, rabbits browse lower – but I have only seen one deer on the path – so far.

Feathers of all kinds can be found on the lane. often when walking up the path blackbirds can be seen and heard hurrying away through the trees and smaller sparrows stand their ground for longer. Magpies are usually very busy watching while ravens and the occasional buzzard make their presence known higher in the sky. Rosie, the dog is a great companion to have on the lane. She senses the hidden elements that I, the human, do not. She is happy to sniff and watch while I  look for the things she has seen. 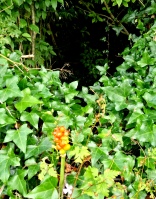 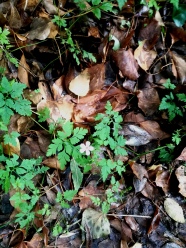 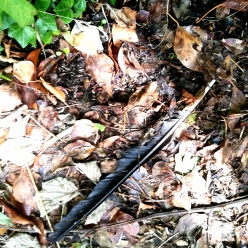 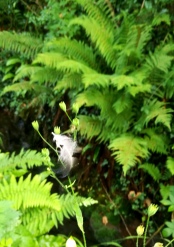 Welcome to my web site!